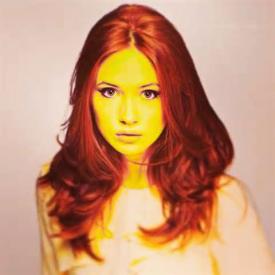 Her mother sold her for cash when she was six years old to a couple, Gith and Syliar, who were with the Orion Syndicate. Started being hired out as a "party favor." At 13, was purchased by a wealthy Bolian criminal named Gennar, who treated her badly. At 15 she killed him and escaped in one of his shuttles. She lived by her wits and eventually came to Federation space, where she found ways besides prostitution to make her living.

At Starbase 616 she took a job in a restaurant and quickly learned how to do everybody's jobs as good or better than they could do them. The chef, Kavis, taught her to read and write, and she quickly got a basic education on her own using the station's database. By the time she was 18 had decided to apply to Starfleet Academy.

In her third year, the Sident invaded the Federation. Starfleet lost a lot of ships in the Battles of Vulcan and Earth, and a great many personnel. Because of her high grades, she was given an immediate commission as an Ensign and assigned to the USS Valkyrie as an Operations officer.

After the destruction of the USS Valkyrie, was assigned to the USS Pathfinder as an Operations officer. Became Assistant Training Officer aboard the Pathfinder, under LtCdr. Alex Denebris-Davis, then returned to Ops. In 2404, transferred to Flight Control.

Very guarded. Comes off as a party girl, but really looking for something deeper and more worthwhile. Likes the Federation, and Starfleet, but still finds it very hard to trust anyone. Demands to be treated as an equal, and wants her work to speak for her. Eager to prove herself.

Had made herself an expert on every aspect of starship operations. Eager to take on the tasks nobody else wants. Minored in CONN at the Academy.

Loves music, and loves to dance. Also deeply moved by art and poetry. Has taken an interest in self-defense techniques and received private training from her Academy roommate, Stacey Summers. Also likes to cook.

Everybody calls her Ciji. Her attitude, and the ever-present chip on her shoulder, have gotten her into trouble. Her ability gets her out of it. She went from being an Orion sex slave to graduating from Starfleet Academy in her third year. She takes pheromone suppressants to counter the effects of her Orion heritage.

Za'cijimaa isn't her real name, just a vague (and negative) descriptive term her former owners gave her when she was a little girl. Doesn't remember her real name.