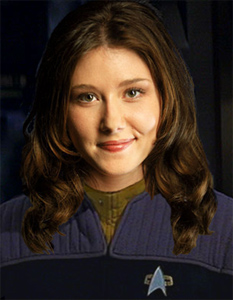 Zoë Amanda Vil was born at stardate 2366.08.12. She grew up in Deneva Colony with her older brother Eric, and in 2384 she graduated from George Samuel Kirk High and joined Starfleet Academy. After she graduated in 2388 she was promoted to Ensign and assigned to the USS Polaris (NCC-63896) as Operations Officer.

When she heard about the USS Atlantis' (NCC-83548) mission to the Gamma Quadrant she immediately requested a transfer, and in March 2391 she was assigned to the Atlantis, just before the ship was leaving the Alpha Quadrant.

Transferred to the USS Odyssey in August 2395, and after Leo stepped down as Chief Engineer of the Odyssey in May 2396, the young family moved to Yeager Colony.

In December 2397 the USS Odyssey, with Leo aboard, disappeared without a trace, and the ship remained missing for half a year. Shortly before Leo's return, Zoë found out she was one month pregnant with twins, with Lt Commander Doohan, Yeager Colony's Chief Scientist. It took Leo some time to come to terms with it, but as the pregnancy progressed, all four (Zoë, Leo, Krista, and Scott) moved to Zoë's parental home on Deneva Prime.

Only a few weeks later, the Sident attacked, and Zoë's brother Eric was fatally injured and his Bajoran wife Lani was killed, when the USS Epimetheus that they both served on was badly damaged in the defense of Earth. On 2399.01.17, Eric died in a Starfleet hospital on Earth.

Shortly after the birth of the twins (Michael and Erica, 2399.03.15), Zoë suffered a mental breakdown, being unable to deal with the death of her brother. It turned out she had had an empathic link with her brother, due to a Betazoid ancestor, and she was refusing to let go of the phantom echo of Eric that she still felt in her mind. When she entered an almost permanent catatonic state, Zoë was moved to a hospital on Betazed.

Near the end of 2400, Zoë recovered, and early in the next year, she was declared fit for duty and she returned to Starfleet as an Operations Officer (and part-time school teacher) aboard the USS Pathfinder.

In December 2401, Zoë and Leo got married on Deneva.

She has one child with Leo Montgomery; Krista (born 2392.01.24)
She has two children with Scott Doohan, twins; Michael and Erica (born 2399.03.15 at Deneva Colony)
After the deaths of her brother and sister-in-law in the Sident attack on Earth, she became the legal guardian of her nieces Pallra and Tara Vil (both born 2391.12.12)