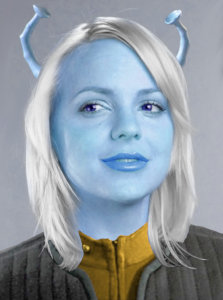 Triss and her sister grew up without a mother and with an abusive dad. After their dad was stabbed to death in 2386, the two girls were raised by a family friend, a cop named Ghim ch'Ordon.

In late 2394, Triss joined the Andorian police academy, but during her training, she encountered several cases that made her decide the job would not really be what she had envisioned.

Their friendship turned into a romantic relationship, and in 2401, she moved in with Melissa in shared quarters aboard the Pathfinder.

While on shoreleave on 2403.03.03, the old Terran date being 03.03.03 (and possibly some alcohol) inspired the two women to get married right at that very moment, but they haven't regretted the snap decision at all.

Triss can sometimes be impulsive, acting without thinking first, at least not about her own safety. The safety of whomever is under her care always comes first.

During her time as a trainee at the police academy, she accompanied her foster father when he had to deliver some bad news to the parents of Thy'lok Vrass, former CSO of Pandora Station, who committed suicide on 2395.06.14. This, and a few other bad-news situations, led her to reconsider her choise to join the police, and instead she would enlist into Starfleet, where she felt she could focus more on protecting people.