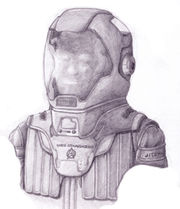 Outside of the modified lab Rusit moves around the ship inside a containment suit. The suit is a typical Starfleet space suit at 5 ft tall humanoid shape. The only noticeable differentiator is the helmet where Rusit projects two white eyes and basic facial features.

Appearance in the suit is the two white eyes appearing in a deep blue mist.

Inside the modified lab, Rusit leaves the suit and exists as a mist with out any definable features or person.

Rusit has no sense of individuality. They were created in the hive's mind in 2300 in response to their need to understand the planet in more detail. To that end, the hive mind created Rusit to act as their science representative. Imbued with the collective science knowledge of the hive mind, Rusit was immediately inquisitive and challenged the hive minds state. Finding their voice embraced by the others as a way of gaining deeper understanding of the universe around them.

The USS Franklin located the Nizhrak'a home world, and on discovery of the improbable state of the planet, scientific study was undertaken. Whilst the Nizhrak'a had encountered species from outside their own before, no contact had been made. It was the hive mind's protective nature to avoid contact with other species.

Rusit found the possibility of a species being equally as scientifically curious as a sign that contact should be made. The logistics of how to achieve that was most difficult.

During the Franklins' scientific study of the planet they began to launch probes. Unknown to them, the entry of the foreign matter caused pain to the hive mind. In this state the hive mind panicked, striking out at the probes with electrical impulses. The unexplained disabling of the probes, lead to the Franklin sending more probes.

Rusit convinced the group to leave one active and interfacing with the technology Rusit was able to achieve communication with the Starfleet ship. Explaining the circumstances and what pain it was causing, Federation ship gave aid to the Nizhrak'a to repair the damage.

In the years following contact with the Federation ship there was a great divide. Half of the Nizhrak'a wanted to extend more contact with Starfleet whilst others wanted to discontinue contact and return to the isolation.

Rusit spoke loudly in support of expanding contact. Arguing that now they were aware they were not alone they could not return to their prior state. Rusit then offered an option whereby they could take Federation support and scientific contact whilst remaining neutral. The consensus was reached: within the next 3 years contact proved to be most beneficial enhancing the collective knowledge of the Nizhrak'a.

Whilst Rusit was not the first Nizhrak'a to join Starfleet, they were the first since membership was achieved. The first member of Starfleet of the Nizhrak'a led the way to even closer relations and helped design most of the devices used by Rusit to integrate with the physical world. Knowing the difficulties of this type of integration, Rusit entered Starfleet with the simple goal of expanding their experiences to enhance their people's knowledge and the Federation.
Having no interest in other aspects of study, Rusit focused on expanding scientific knowledge. Bringing their understanding of their species, Rusit is most successful in the arenas of Xenobiology and comparative biology. Rusit also showed capability at leadership, used to reaching consensus they develop a leadership style that is singled out by the instructors to be explored. Following additional specialisation, Rusit graduated as ACSO to the USS Pathfinder.