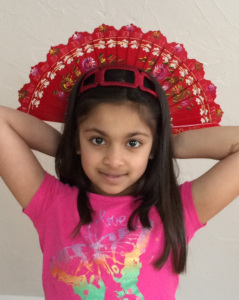 Pearl is half Hispanic and half European Human. Short, dark hair.

Born, 2393.09.23 aboard the sailing ship SS Octavia, on the planet Crannar. Parents, Emile and Anita Schofield, were taking a delayed honeymoon. They were headed for Risa when the ship they were on was destroyed, and they were stranded on Crannar. This is also when they found Pearl's adopted sister, Lil'ana Lauvell.

Family moved to USS Leo Major, where her Father became Captain, 2397. Children, including twins Frank and Juanita Janice, moved to Starbase 111 to live with their older brother, Vincent.

Family was going to move to USS Sovereign, but Special Order 4432-Alpha-2 forced the children to live elsewhere. As big sister, Lil'ana, was moving to the USS Pathfinder for a medical internship, Pearl went along with her. She stays with Marc Vale and his wife, Erina D'Jaan.

Bright, happy child. Loves to pitch in and be a 'good helper.' Enjoys dancing.

Coloring, and studies dance with her mother and sister. Also good at feeding and brushing Max, the family dog.

Loves to watch ancient cartoons on the television her father replicated.