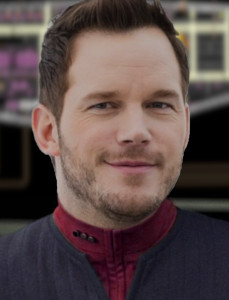 Causasian Human male. Medium build, blue eyes and brown hair. Lately, some gray hairs have been showing up as well.

Leo Montgomery was born on 2365.07.25 and is the youngest son of Jennifer and Alan Montgomery.

When Leo was 5 years old, his 20 year older brother Cole graduated from Starfleet Academy and Cole was assigned to the USS Odyssey, but one week after his graduation, and two days before Cole was supposed to arrive on the Odyssey, the ship was destroyed by the Jem'Hadar.
A few weeks later Cole was assigned to the USS ShirKahr. Leo's brother was killed in 2374 when the ShirKahr was destroyed by Dominion orbital weapons platforms in the Chin'Toka system.

In 2386 Leo went to Starfleet Academy and he graduated on 2390.01.12. He spent a year on the USS Polaris, a Norway class vessel, as an Engineering Officer before he requested a transfer to the USS Atlantis, the first Starfleet ship to go on a mission to the Gamma Quadrant since the Dominion War had ended.

Leo was assigned to the Atlantis early 2391 as the Assistant Chief Engineer. On the Atlantis, he started a relationship with Operations officer Zoë Vil, someone who had also transferred from the Polaris.

He was promoted to Lieutenant 2393 and because the Atlantis's Chief Engineering Officer, later also serving as the ship's Second Officer.

Leo transfered to the USS Odyssey in August 2395.

In May 2396, Leo stepped down as Chief Engineer and Second Officer of the Odyssey to be able to spend more time with his family, and they all moved to Yeager Colony. At Yeager Colony, he served as a Senior Engineering Advisor.

In December 2397, the USS Odyssey is sent to rendezvous with the USS Albatross in the Gamma Quadrant. The Albatross had been missing for two years and aboard had been the USS Atlantis's former CO Captain Torn. Leo volunteers for this mission, as Torn had been his commanding officer both as a CO and as Chief Engineer before. After the Odyssey reported having reached the Albatross and would be returning home, the Odysssey disappeared without a trace, and seven months later the ship had been presumed lost.

During a diplomatic conference at Yeager Colony in July 2398, it was found out that the Odyssey had been hijacked by the children of some powerful aliens. One of their parents appeared at Yeager, explaining the situation: the children had been using the Odyssey and her crew as toys. The parent couldn't directly stop the children, but he was able to share information about how the Odyssey could be brought back to end the crew's torturous ordeal.

When Leo returned, Zoë had some shocking news for him: she had recently found out she was one month pregnant, expecting twins. The father was Lt Commander Scott Doohan, Yeager Colony's Chief Science Officer. Initially not sure how to deal with this, he did come to terms with it, and as the pregnancy progressed, the four of them (Zoë, Scott, Krista, and Leo), moved to Deneva Prime, where Leo joined the crew of one of Starfleet's orbital facilities as senior Engineer.

Only a few weeks later, the Sident attacked, and Zoë's brother Eric was fatally injured and his Bajoran wife Lani was killed, when the USS Epimetheus that they both served on was badly damaged in the defense of Earth.

After the birth of the twins, Zoë suffered a mental breakdown, being unable to deal with the death of her brother. It turned out she had had an empathic link with her brother, due to a Betazoid ancestor, and she was refusing to let go of the phantom echo of Eric that she still felt in her mind. When she entered an almost permanent catatonic state, Zoë was moved to a hospital on Betazed.

Leo wanted to return to a more active position in Starfleet, and in August 2400, Captain PaRel of the USS Pathfinder asked him to become the ship's First Officer. Leo accepted, and a month later Leo, his daughter Krista, nieces Pallra and Tara, and their cat Fidget, moved to the Pathfinder.

After Zoë's recovery at the end of 2400, she returned to active duty in Starfleet and came to the USS Pathfinder in early 2401. Around the same time, Captain PaRel retired from Starfleet and Leo was Acting CO of the Pathfinder for a while, then briefly back to First Officer again when Captain Kane took command of the ship for a classified mission to a planet within the Din'ghes Nebula.

Leo was promoted to captain and officially became the Pathfinder's Commanding Officer on 2401.09.17.

In December 2401, Leo and Zoë got married on Deneva.

The death of his older brother affected him badly as a child, but it also led to his decision to join Starfleet. He wanted to prove to himself that the exploration of space, while it came with dangers, was also one of the Federation's greatest missions.

This is also the lesson he wants to teach to his daughter and nieces, despite the tragedy that occured during the Sident attack.

Leo likes to tinker with machines, even in his spare time. Also likes to read.

Leo has a daughter with Zoë Vil: Krista Montgomery, who was born 2392.01.24.
After the Sident attack on Earth in January 2399, Leo and Zoë became the legal guardians of twins Pallra and Tara Vil (born 2391.12.12) after the girls' parents, Zoë's brother Eric and his Bajoran wife Lani, were killed.
Leo is godfather to the twins Michael and Erica Doohan (born 2399.03.15).

Leo owns a small, old cargoship, the Eccentrica Gallumbits, which he inherited from his grand uncle Leonard 'Lenny' Montgomery. The SS Gallumbits has been modified and now functions as their family's personal transport, with Deneva Prime as home port.