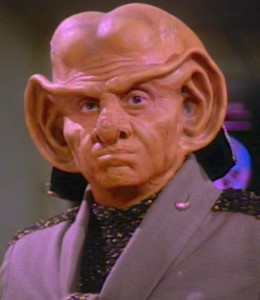 Signed a marriage contract with Tau, a Ferengi woman who ran a rather successful business on Ferenginar, but because she was female, this was illegal and in order for her business to expand, Lepton agreed to pretend to be the owner of the company, even though he loathed the traditional Ferengi values of making profit.

When Rom became the Grand Nagus in 2375, and it became legal for female Ferengi to operate a business, the contract between Tau and Lepton was annulled, and Lepton was able to pursue a different career: school teacher.

He worked at a school on Ferenginar for a year, but found that the majority of Ferengi children, or at least their parents, weren't interested in things other than business and profit, despite the changes under Grand Nagus Rom. Lepton moved to Deep Space Nine for a while, and from there, he ended up teaching children aboard several Starfleet vessels, the latest being USS Pathfinder during the year 2400.

This character can be used by anyone (where appropriate in his role as school teacher). His personality is pretty much like a 'stereotypical' Ferengi, except replace profit and business with knowledge and teaching.