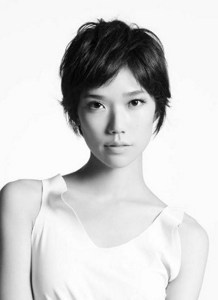 Aya is thin, but not unhealthily so. Being a practical woman, she wears little to no make-up. She also keeps her nails short and keeps her hair in a pixie cut.

Aya Lee is the youngest of seven children born to Paul and Akemi Lee of Vega Colony. She is the only girl of the seven. All of her family work in blue collar jobs. This led to her upbringing putting emphasis on two things: Family and earning your keep. It was this attitude that caused her family expect Aya to take up profession such a waste processing or construction. And during most of her early childhood, that was exactly what Aya intended to do.

That all began to change when Aya was twelve. Aya was out on a walk with her mother when they encountered another hiker who had taken a bad fall. The woman was badly injured and had to be rushed to nearby medical facility, which happened to be a Starfleet Outpost. The local Starfleet staff healed the woman and her life was saved. This made Aya consider Starfleet as a career option. At this time, however, she continued her schooling on construction.

Then, at age 16 - and mere days before she was to join Vega Construction Inc - she encountered Lieutenant Junior Grade Edmond Dantes. Dantes was a recruitment officer assigned to Vega IX. After talking to Dantes, Aya decided to join Starfleet instead. This shocked her family and it almost caused a rift between her and them. Fortunately, her grandfather Ian arrived from Earth and was able to prevent this. And by the time Aya graduated Starfleet Academy, her family was extremely proud of her.

While she had picked Starfleet after talking to Dantes, it was her mother who helped her pick her department. Akemi Lee arranged for her to get an internship aboard a garbage scow called the SS Virgil. It was during this period that Aya decided to become a pilot. This internship ended several months before she turned eighteen. She enrolled the day after her birthday.

Aya graduated at the very top of her Academy class. It was at this time, however, that the greater Lee family caused a major hiccup to her career. While Paul and his family were not public figures, the rest of the family were officials, politicians and other high profile people. These people were spoiled, elitist and arrogant. And they had ruined the Lee family name, making plenty of enemies in the wrong places. This resulted in Aya not getting a starship assignment, but being exiled to Starfleet Intelligence instead.

Starfleet Intelligence - not pleased with being handed the proverbial hot potato - then assigned her to the Special Operations Branch, Section Five. Since Section Five was defunct, this meant she assigned to desk duty. But without any assigned duties. It was at this point that Aya considered resigning from Starfleet. Ironically, it was her parents and brother who convinced her to remain in the uniform. It was her grandfather that told her to 'use what she had'. And what she had, was security clearance to enter the archive and read some of the mission reports prior to 2396.12.04. (The day Emile Schofield became commanding officer)

Using her clearance, she proved that that the other four sections of the Branch had been dumping mission they felt were beneath them, on Section Five. Only to steal the credit once said missions were complete. She did this for over three years, eventually impressing somebody higher up. This led to her being promoted to full Lieutenant. And - eventually - at transfer to the Flight Operations department of the USS Pathfinder.

Despite the support of her family and graduating at the top of her class, Aya is shy and introvert person. She is not a fan of social events or large groups people. Instead, she prefers to spend her off-duty time alone in her quarters. When on duty, she works hard and is very hard on herself, not tolerating mistakes. Her brother John sums up her attitude as a 'Grade-One Workaholic'.

Besides her work, she is very attached to her family, calling and writing them often, She is especially close with her brother John and her grandfather Ian. Aya is also very fond of animals, owning two rabbits called William and Shakespeare. Finally - despite her armor of shyness - she bonds easily with children.

Positive: Aya is a top-notch pilot, which was reflected in her graduation of Starfleet Academy. She is also an excellent swimmer. Her exile to Starfleet Intelligence has also made her very good at paperwork.

Negative: Medical skills and science. Aya is horrible at both.

Aya spends all of her off-duty time either studying her assigned duties. When she is not studying, she is reading. Her favorite subject is history, especially 20th and 21st century. Beyond that, she spends a time in the swimming pool - either at Guido's or in the holodeck - to keep in shape.

The rest of the Lee family are arrogant, elitist and spoiled. Basically, they are the Kardashian family of Federation. Their attitude has led to major schism between them and Aya's branch of the family. The two branches have zero contact and do not get along at all. The only person outside her direct family Aya has contact with is her uncle Samuel, who is the black sheep of the family. Samuel Lee is a writer and a painter who lives on Betazed.