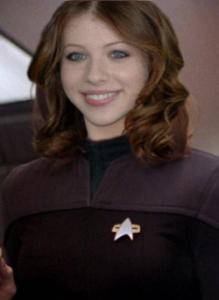 Melissa is not very tall, slightly below average for a human. She has blue eyes. Her brown hair used to have a few streaks that are dyed a different colour (usually purple), but lately she has been doing that less (for no particular reason).

Melissa is sometimes insecure about her own skills, and this generally results in her being very perfectionistic about her work.

Initially she didn't consider joining Starfleet as she thought she was not suited for the job, but her mentor at the University of Alpha Centauri convinced her otherwise.

Since her second year in the Academy, she generally avoids talking about her stepfather (Captain Seth Kane), as she doesn't want to seen as the daughter of a high ranking Starfleet officer.

Melissa used to think she was really bad at math, but she ended up realising classes in school were just too boring. She's a fast reader, and speaks/understands several (ancient) alien languages.

She has a collection of obscure brightly colored pony figures from Earth's 21st century.

The fact that her biological father is still alive is not public knowledge.