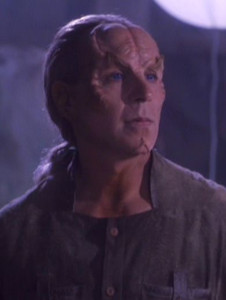 Regular looking Denobulan male. He likes to keep in shape. He has a scar on his right leg, because of an accident he had as a child.

Jagos was born on 2375.09.14, as the second born in a large family. His parents were scavengers: they collected what other people called junk, and repaired or re-engineered it to make it into something people could use again. As a result, they spent many a day tinkering, something Jagos grew up doing as well. It was said that even before he could walk, he could use a hyperspanner.

He quickly found out though, that he enjoyed testing the devices his family made, more than actually creating them. Especially if he could drive or fly something. At the age of twelve, he got his hands on a hoverbike his parents had just renovated, and snuck out of the workshed to test it. This went horribly wrong: he took a wrong turn and crashed against a tree. He needed several surgeries, but luckily made a full recovery. After that though, it took some time for him to even get close to a vehicle his parents put together.

Still, he enjoyed tinkering with and testing the different vehicles too much to stay away for long. His parents could see this too, and encouraged him. They thought that he might one day take over the family business... but Jagos had other plans.

Ever since his first visit to a spaceport, Jagos had dreamt of flying amongst the stars. It didn't take long for him to get his first shuttle flying lesson, and at the age of 17, he had his shuttle permit. Now that he had gotten a taste of what it was like to fly in space, he wanted more of it. The best way to do that, he figured, was to join Starfleet. So he signed up for the Academy.

The Academy turned out to be a great adventure for Jagos. It showed him there was more to space than just flying through it. His engineering background came in handy here, as well as his scavenging background: often he found an 'outside the box' solution for a problem that others hadn't thought of yet.

After the Academy, Ensign Jagos was assigned to the Sabre class USS Meridan, as a pilot. Finally, he got to do what he wanted to do: pilot a starship. So, it was quite a disappointment for him to find out that most of the time, a pilot's job was to orbit a planet, warp somewhere, come to a full stop, or something similar. Evasive maneauvres, fancy shuttle moves and stuff like that, didn't happen on a day to day basis.

It was almost enough for Jagos to resign. Almost. Because while sometimes mundane, he still had the enormous power of a starship's engines at his command. There was just no other feeling like the ship doing what he wanted it to do. As time went on, he began to enjoy his job more. And for the more exuberant maneauvres that he wanted to perform... well, there was always the holodeck.

One of the reasons he stayed on, didn't have anything to do with his job at all: he fell in love and got married to his first wife, Zinabe, who was serving on the Meridan as a scientist. Unfortunately, they both got transfered, to different places. While he went on to become a pilot of the Intrepid class USS Huxley, Zinabe got assigned to Yeager Colony. They've been having a long distance relationship ever since.

After completing his tour of duty on the Huxley, Jagos got assigned to the USS Pathfinder as a Lt.jg and ACONN. Jagos was looking forward to piloting the transwarpship.

Jagos is a risk-taker. He likes to push the limits of what is possible. That isn't to say that he can't or won't follow orders. He recognises the chain of command, but isn't afraid to give his own opinion if he feels that might help the situation.

Jagos loves to ride or fly all kinds of vehicles. He's pretty good at it too. Not only that, but he enjoys maintaining the vehicles he uses, always trying to push the limits of the vehicle. Sometimes that works, sometimes he blows up a power conduit in the process.

One of Jagos' favourite pasttimes is participating in extreme sports. Anything that takes him and his vehicle to the edge. He usually does this on the holodeck though. While not really seeking his boundaries when doing it there, he does find it minimises injuries.

Secretly, Jagos also enjoys dancing. He feels he's gotten quite good at it, but he's somewhat embarassed by it as well, so he doesn't often show off his dancing skills to anyone else.