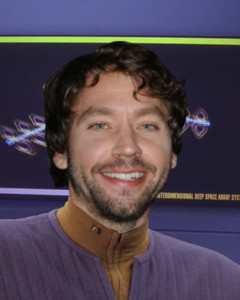 Jack looks generically humanoid. He's almost identical to Jill, though he's a bit more muscular. They do however have the exact same mass. They might be brother and sister, or husband and wife, or just friends... they've forgotten what they are to each other, really.

Jack and Jill come from a species who have an incredibly long lifespan. They don't care much for long term memory though: at some point, they apparently decided to leave their planet, but after a prolonged period of time, they forgot who they were and where they came from. So now, they're just roaming the galaxy, looking for new experiences. Of course, some of these experiences, they might have done before. They just don't know.
Upon learning of Starfleet, they decided to join up. After all, they lived in a galaxy with all kinds of creatures, and they figured that joining Starfleet was one of the best way to learn the social ways of these people. They eased their way through the academy and now they found themselves assigned to the Pathfinder.

Jack and Jill have a very care-free attitude. They like to experience new things, but all the other things that other humanoids worry about, are just not that important to them. They do, however, have compassion for the other creatures they come in contact with, which keeps them from being dangerous to others.

Roaming space for a prolonged period of time gave Jack a better understanding of the universe. He doesn't remember all of it, of course, but this understanding helps him see things in perspective.

Jack can sometimes be quite chaotic. He finds it difficult to bring order to what he is doing. Yet, he always gets the job done. He does have a preference for jobs in which he can learn something new, though.

Both Jack and Jill want to experience new things. So, they're always on the lookout for new adventures, new stimuli.

Jack and Jill are able to merge with each other. They need to do this every 20 to 40 hours. If they don't merge regularly, they become confused and loose motor functions.
Both Jack and Jill are very hard to kill. In fact, if one of them dies for some reason, the other just merges with the body, and not long after that both are alive and healthy again.
The name of the species, 'yam', comes from an Academy official who referred to them as "I yam what I yam, and dat's all what I yam."