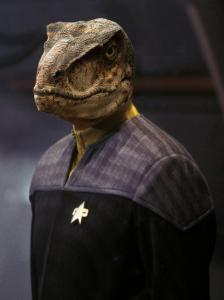 In 40 years of Starfleet service he had maintained his fitness levels as much as possible. However his muscle tone is average as his offshoot is not designed for the speed of the Fejimaera or the strength of the Mazzereht. He also lacks the pretensile tail.

Glarus' movement is adapted due to his prolonged exposure to bipedal species. He rarely moved on all fours and stands more upright than others in his species, he has also reduced his swaying movement that is a hallmark of his species. Due to their predatory nature the traditional movement pattern is prolonged stationary movements followed by bursts of speed. To make other species more comfortable he attempts to move in a more human manor.

He is of average side for his species, however appears taller due to his bipedal walking. His skin is cold to the touch, due to being cold blooded. His claws remain shortened compared to a majority of his species to aid with integration with Starfleet equipment.

Prestarfleet 2335 to 2360
Glarus was born as part of the brood of 2335, the Gnalish species do not breed in a traditional manner. The father will produce close to 400 off spring by fertilising eggs. To win the right to reproduce the male must win the right of insadja'tu. One of each of the subspecies run a challenge the winner of that wins the right to fertilise the eggs. His brood is one of the few in recorded history where the Mazzereht won the right. Since they lack the speed of the Fejimaera and the strength of Arklash.

As his brood was from the Mazzereht species they focused on educational achievement more than physical prowess. Glarus excelled at understanding of computers and engineering, having more of a natural ability than having to work hard at attaining the skills. As his planet entered the United Federation of Planets in 2355 Glarus applied to Starfleet at the first opportunity.

Starfleet Academy 2360 to 2364
Glarus found the academy difficult due to his large differences to his classmates and other Federation species. In winter, it became particularly difficult being cold blooded he became much slower in his movement and mental ability. Over time he was able to adapt to the conditions but must keep his personal quarters warmer than most Federation species find comfortable.

Whilst in educational capacity Glarus excelled he found the physical elements of training difficult, landing himself in the lower tier for running and hand to hand. On one occasion during hand to hand Glarus bit his opponent. His species can produce a toxin from his fangs that renders the victim immobile but not otherwise injured. He received a displinary action until he protested and had it removed and replaced with a commendation for outside of the box thinking.

USS London 2364 to 2382
Stationed to the USS London, Glarus made efforts to try and integrate with the crew more than he had done at the Academy. The CEO commented that 'Whilst Glarus makes every effort to integrate with the crew. There is a slight unease around him, whilst it is nothing he is doing it seems more to be a evolutionary fail over from our home planets and Glarus' appearance as a predator,". After considering his colleagues nervousness Glarus began to alter his movement style walking more upright and clipping his claws back as far as possible whilst not injuring himself. He also restricted his own eating to his personal quarters.

His Career on the London, was one of mixed results. Whilst he excelled at his technical duties he became more insular and hostile towards his colleagues. On the CEO's recommendation he underwent therapy and adapted his behaviour more. Integrating closer than ever with the crew but still preferring the company of computers.

Insadja'tu
2382 it became the cycle for his brood to challenge for the right to fertilise. Glarus took a leave of absence from Starfleet to undergo the right. Glarus has not disclosed the result of the trial but was transported back to Starbase 159 with severe injuries and returning with out his tail. Undergoing medical treatment and learning to walk again Glarus underwent psychological treatment pertaining to the event.

Return to Starfleet
Whilst his injuries healed Glarus had to walk with a cane, this was a knock of confidence for him and instead of active service on a Starship he moved to Experimental Vessel Design division. Secluding himself in his work. Until he formed a close friendship with Elizaveta Hayashi, Glarus had minimal contact with any of his colleagues.

USS Tesla
Glarus returned to active duty on a Starship, after much nudging from Hayashi. Accepting a position as CEO on the Tesla due to the promotion of the old CEO to FO. Glarus' career was solid whilst at the Tesla carrying out his duties to a high level of proficiency. Utilising his predatory appearance he at times fell foul of the FO for threatening to eat subordinates that did not do their duty to his high standards.

Glarus is single minded to the point of a fault. Whilst in engineering he is confident and in control. Holding his teams to a exacting standard, he holds himself to even higher. To this end he does not accept failure lightly of himself or his people.

It is noted whilst some species feel uncomfortable around him, Glarus can over compensate trying to seem more friendly than is normal or alternatively more aggressive, playing into the view some hold that he is a predator. Whilst the truth of the matter being he aphors physical confrontation and doesn't like meat.

In a attempt to integrate more into Starfleet Glarus tries to adopt human humour. Trying to play practical jokes on his colleagues. Whilst this is not a major concern it at times needs to be kept in check. It is not out of malice but more down to his attempts to integrate.

A natural inclination to learning and computers, Glarus focuses heavily on his work to maintain his expertise.

Whilst he lacks massive physical strength he has the ability to unleash great speed for short periods of time if he is temperature is high enough.

Due to his ectotherm nature Glarus can function on long periods with out eating. In one case going 6 months with out eating on a particularly interesting project of his.