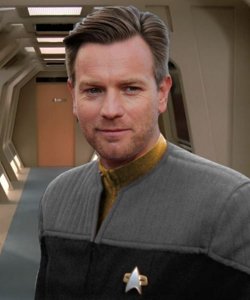 Christopher Andrew Dwyer was born on April 1st 2369 in Plymouth, England, to the then-head of Starfleet Security, Admiral Angela J. Dwyer. As he grew up, he wanted to be so much like his mother, a Starfleet officer.

He finally got the chance when he went on a college careers visit to Starfleet Academy in 2387, and took the entrance test. He was astounded to find that he had scored highly in that test and was invited to enter the Academy the next year.

One night at the Academy, Chris found himself facing expulsion for an offence he did not commit. But it was thanks to the loyalty of a fellow cadet that cleared his name and exposed the true guilty party. These two cadets became firm friends and accompanied each other on several Academy classroom projects. The name of the cadet that saved his Starfleet career was Jonathan Ditch.

Several months later, Chris was saddened to learn that Jonathan had to leave the Academy to attend to his family's engineering company, but Chris promised his friend that he would 'go the distance' and become a Starfleet officer.

Chris graduated in 2392 and was posted to the USS Courageous as a security officer, where his commitment to duty and determination to be the best earned him a promotion to ASTC.

He was reported MIA, following the Courageous' disappearance in late 2392.

When the Courageous was discovered in 2393 by the USS Calhoun, in orbit of a planet in the Beta Quadrant, it transpired that the ship had committed atrocities against other ships trapped with her. Chris secretly transmitted evidence of these incidents to the Calhoun. During one of these transmissions, he was discovered and Chris was forced to flee the Courageous in a Type-8 shuttlecraft.

The Courageous pursued Chris relentlessly, until he hid his shuttlecraft in the upper atmosphere of a class-J gas giant. There, the Courageous lost contact with Chris' shuttle and, believing it destroyed, left the region, allowing Chris to escape.

Chris eventually surrendered to the USS Sarek, where he immediately offered to testify against his former crewmates. His offer was relayed to the Starfleet JAG Corps, who decided that Dwyer may be worth listening to.

Upon arrival on Earth, Chris explained to Starfleet Command about the transmissions he sent to the Calhoun, signed 'A mutual friend', which contained the evidence they needed to prosecute Captain White and her officers. Starfleet decided to take his testimony under consideration, but first, there was a matter of standard procedure.

Chris found himself being court-martialled over his actions on the Courageous, based on evidence uncovered by a Starfleet Security investigation. However, an officer from the Calhoun testified on Dwyer's behalf and, as a result, he was acquitted. The name of that officer was then-Ensign Jonathan Ditch.

Following the trial, Chris was placed on leave until Starfleet considered his fate. In the end, they agreed to allow Chris to testify again the Courageous crew, in return for a six-month probationary tour of duty on a ship of their choice.

Chris was assigned to the USS Calhoun, under the command of Captain Kemoko Djidonou, as a security officer. It was here that the past began to haunt him.

The man overseeing his probation, Starfleet Admiral A.J. Simmonds, was the father of the man who had tried to frame Chris. He tried to use his Starfleet and family connections to try and ostracise Dwyer and, ultimately, destroy him.

In the end, Chris managed to overcome these obstacles and, with the help of the Calhoun crew, exposed Simmonds and his family's parts in a conspiracy to aid the USS Courageous to avoid Starfleet pursuit and pin all the blame on Chris. Simmonds, his family and and their associates were arrested and subsequently imprisoned.

Following the revelation of the Simmonds' illegal actions, Dwyer's probation was reviewed and serious violations of protocol and discrepancies were found in all the reports written by the former admiral. In response to this, Starfleet Command overturned all of Simmonds' recommendations and released Dwyer from the terms of his probation, leaving him a free man.

Not long after this, Chris married Jessica, the ship's transporter chief. A year later, their daughter, Elizabeth Dawn Dwyer was born.

On 2396.04.15, he was diagnosed with a low-level brain tumour. Despite this, he played a key role in the shipboard incident involving a group of children who posessed mind controlling abilities. His actions earned him a commendation for bravery.

Three days later, the tumour was removed and he returned to normal duties.

Two months later, the Sident Crusade began. Leaving his family behind on Earth, Chris served on the Calhoun as it tried to find the Sident homeworld.

During the mission, however, the ship collided with a 29th Century timeship, which dragged them not only to their desitination, but 800 years into the past. Chris served as a member of the initial away team to the planet, but later returned to the ship, where he participated in what has become known locally as 'The Battle of Deck Nine'.

After witnessing the carnage and the chaos wrought by the conflict, Chris suffered a slight breakdown, in which he tried to mutiny against Captain Summers. Fortunately for everyone, he was stopped and relieved of duty before things got out of hand.

A day later, following some counselling, he was ordered back to duty, due to a manpower shortage on the ship. Chris served on the Bridge during the final battle against the Sident and witnessed their abrupt departure which ended the war.

In the days that followed, he assisted in search and rescue efforts down on Earth. It was during this that he was informed that his mother had been killed in the attack on Starfleet Headquarters. The news sent him spiralling into a deep depression and he was quickly placed on bereavement leave.

After spending several months in seclusion, his wife and children helped him get over his mother's death. He soon returned to duty, only to be informed that he was being reassigned.

On 2399.03.01, he was transferred to the USS Valkyrie as a security officer. Over the next three months, he showed a 'dedication to service and a passion for his work'. This positive appraisal resulted in a promotion to Assistant Chief of Security, with which came an increase in rank to Lieutenant Junior Grade.

Almost a year later, he received word that his daughter had been in accident whilst she was at school. Chris took some emergency leave and headed back to Earth. He remained there at her side until a rather abrupt Starfleet personnel officer approached him and ordered him back to his ship.

This order sent Chris into a downward spiral and he began drinking heavily. Matters soon came to a head when, following a Romulan attack on Yeager Colony, he tried to sober up and assist in the pursuit of the attackers. Unfortunately, his sudden abstination quickly led to him developing symptoms of alcohol detoxification. He spent two weeks in Sickbay before finally being released, only for him to be caught up in the evacuation of the Valkyrie prior to her destruction.

As soon as he returned to Earth, Chris went into rehab. After successfully completing a twelve-week course, he returned to duty and found that he had been assigned to the new USS Pathfinder as her Assistant Chief of Security and Tactical.

Over the next year, he served under Lieutenant Stacey Summers, who was the daughter of his former captain, Dawn Summers. When her tenure as his superior ended with her transfer to Starfleet Academy, Chris was promoted to full Lieutenant and replaced her as Chief of Security and Tactical.

He remained in this position for the next three years, building his security team into what he considered to be the best in the fleet. But then came a surprising turn of events, when Starfleet abruptly decided that Chris needed a few more years experience under his belt. As a result, he was replaced by the newly promoted Lieutenant Commander Stacey Summers.

Chris is a committed and determined individual. He never gives up on anyone or anything, even if the situation seems hopeless.

His experiences from his time on the Courageous have hardened him emotionally and mentally, giving him a much shorter fuse than he had at the Academy.

Following the extension of his probation on 2393.11.05, Chris expressed anger toward certain members of Starfleet Command, especially Admiral Simmonds. Although Chris was eventually vindicated, the experience has left him with an intolerant attitude toward any Starfleet member who has committed unlawful behaviour.

Following the birth of his daughter, Elizabeth, on stardate 2396.02.23, Chris' mood does seem a little lighter. His happiness was completed by arrival of his son, Jonathan, on stardate 2398.10.01

Unfortunately, three months later, this positive turn in his life came to an end with the death of his mother in the Sident Crusade of 2399. After arranging her burial, he spent the next several weeks hidden away in his family farmhouse outside Plymouth, England. It only took the gentle persuasion of his wife, and daughter to give him the courage to face the world once again.

Following his brush with alcoholism in early 2400, Chris has sworn himself off any alcoholic or intoxicating beverages. So far, he has held himself to that pledge and has been having weekly sessions with the ship's counsellor as well as monthly bloody tests to check his sobriety.

Recently, Chris has been feeling a little bitter over his demotion back to Assistant Security and Tactical Chief. Despite this, however, this has not affected his duties.

Knowledge of layout of starships, including the Jeffries Tubes.

Has acquired knowledge on several subjects through his research for his holonovels. These subjects include medicine, psychology, combat tactics, intelligence-gathering techniques and basic stealth.

Has recently perfected the art of knife-throwing, which he uses in extreme situations to lethal effect.

Chris looks up to his mother a great deal and strives to be the best officer in Starfleet. He believes that his quest to be the best is the strength that keeps him going.

On stardate 2394.02.05, Christopher began a relationship with Ensign Jessica Chung, the Calhoun's Transporter Chief. On 2394.06.08, Dwyer proposed to Ms. Chung and she accepted. On stardate 2394.12.16, they married in a traditional Starfleet ceremony.

2394: Becker IV Mission Ribbon - Participation in multi-national mission to liberate trapped foreign nationals on Becker IV.
2394: Letter of Commendation - Played a pivotal role in the Elizabeth Simmonds murder inquiry.
2395.10.15: Placed on medical leave for psychiatric treatment.
2396.04.12: Returned to duty following psychiatric treament.
2396.04.15: Diagnosed with a low-level brain tumour. Placed on light duties.
2396.04.15: Commendation for Bravery - In spite of illness, Ensign Dwyer saved the live of his captain and several officers during the incident on this Stardate. Mr. Dwyer's selfless actions brought the incident to a satisfactory conclusion.
2396.04.18: Underwent successful surgery for removal of brain tumour.
2399.01.13: Relieved of duty following a 'slight breakdown.'
2399.01.14: Returned to duty due to manpower shortage.
2399.01.16: Took bereavement leave following his mother's death.
2399.06.16: Sident Crusade Campaign Ribbon: Participated in combat operations during the Sident Crusade of 2398-2399.
2400.02.01: Went into rehab to deal with his newly-developed alcoholism.