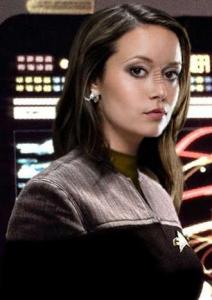 Graduated from Starfleet Academy in 2393 and assigned to the USS Atlantis as Engineering Officer.
Occasionally served as a babysitter for Montgomery and Vil's baby daughter Krista.
Transfered to the USS Odyssey in 2395.
2396.05.12 - Suffered a severe leg injury at Yeager Colony when a building collapsed after an explosion at the Industrial Replicators. Her left knee had to be replaced by an artificial joint.

Was going to get married to a guy named Adam (who also served aboard the Atlantis, but did not get transfered to the Odyssey), but this relationship ended due to "differences in opinion".

Shared living quarters with Melissa Kinnard at Yeager Colony until both of them transferred to the USS Pathfinder in June 2400, where they continued to share living quarters for about a year, until Melissa got into a more serious relationship with Triss sh'Rinda, who moved in with her instead (at Talia's initiative).

Promoted to Lieutenant in November 2402.

Since she got injured in the bombing attack at Yeager Colony in May 2396, Talia is suffering from (mild) post-traumatic stress disorder. She is still taking medication for this.

Talia's engineering knowledge covers a lot of different aspects, but does not really excel in any specific field. She dislikes working on transporter systems.

When referring to her, keep in mind that 'Durka' is her family name.