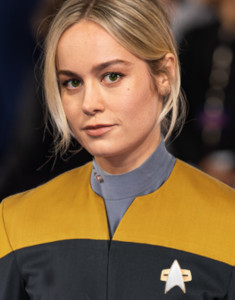 Blond hair, hazel-green eyes, she's thin, but not unhealthily so. Alex has a way of movement that is smooth, almost graceful, which comes from years of gymnastics training. Although of about average height she has something of an easygoing presence, but one that can be intimidating should it be necessary. She stands about five feet, six inches tall and despite it being against regulations in some areas, refuses to remove her wedding ring from her finger while on duty. (Not that anyone on the Valkyrie would EVER say anything about it.)

Alexandra Nicole Davis was born on August 24th 2368 (Stardate 2368.08.24) on Earth in New York City. The daughter of Anna and Peter Davis, a botanist and a chef respectively, grew up the younger of two siblings in a large extended family which was more like a pack. The oldest female cousin, growing up Alex's memories consist largely of playing and family gatherings at her grandparent's home in Cobbler's Notch, Virginia with her cousin Nathan and her best friend Sharon Isles -who stood in as the sister that Alex had always wanted - while her brother Richard, seven years her elder, stood as protector, whether she wanted him to be or not.

Growing up in New York City, where Alex's father owned a restaurant, Alex started taking gymnastics at the age of six and eventually started competing professionally under the coaching of her mother's cousin Perry Calmer. However, when Alex got to High School she'd had enough. She wanted her life back, wanted to stop competing, wanted to be a teenager and not have to get up at 5am every other day for practices. After much thought she quit. But it wasn't long before she had another activity, when her cousin Nathan asked her to join his band Trigo, Nathan and his parents - Alex's Aunt Tabitha and Uncle Jacob - were also based in the city, and the band found some success playing local gigs for fun and some pocket change. It was in the band that Alex met her first serious boyfriend, their drummer Chojiro 'Jiro' Kamida, one of Nathan's best friends.

After high school graduation, the question remained, what next? Of all her uncles and aunts, the one that Alex looked up to the most was her Uncle Zachary, a Starfleet Officer who had once been part of their Intelligence division. Growing up, when scheduling allowed him to attend family gatherings, he would tell the kids stories about traveling among the stars. Never anything too specific, but it got their imaginations working, and when Alex graduated, she made a decision. She wanted to go to Starfleet Academy. It wasn't something she took lightly as it would mean leaving everyone behind, but when she proposed the idea to her cousin and Sharon both said they were interested in coming with her to SanFran. Sharon had decided she wanted to go into engineering - always having had a head for it - and the band were heading out to take part in the music scene. Apparently they'd all known what she was going to tell them and had made the decision before so they had the answer ready.

Moving to San Francisco was an event. Thankfully the whole clan didn't insist on coming to drop Alex off... stranger things had happened. Alex, Sharon, Nathan, his girlfriend Jillian, Jiro and their Betazoid bassist Gemma Stadi decided to load up a van and road trip cross country instead of flying. Upon arriving Alex and Sharon reported to the dorms while the others went to their rented apartment. And so life started anew, Alex and Sharon attending separate classes (especially once Alex decided she was going into the flight program), and all of them meeting up once or twice a week for gigs or practice.

Stubborn and well meaning, Alex Davis is one of the toughest and most loyal individuals that you will ever meet. Tough as nails when the situation entails, her nature is one of a nurturer, but time in Starfleet has taught her that there is a time and place for everything.

Alex has a great sense of family, whether it is her actual family or her crewmates. If someone is in need she is there. Although people sometimes mistake her niceness for being naive, Alex has seen far too much in the better part of the last decade to be considered such. She is a trained Starfleet officer and is aware of what is going on around her. She remembers details, is clever and is good at problem solving. She can act well, and can pull off deceptions with those who don't know her well.

Admittedly she is emotional - it is both her strength and her weakness - and quick to jump to someone's defense. In many ways she serves as a voice of reason or opposition, not afraid to voice an unpopular opinion as it is needed; part of this is because her crew on the Valkyrie is that tight knit that she has no fear of doing so. She is quick witted, smart and not quick to anger. However she does take death very seriously, sometimes even more to heart than she should, it is part of Starfleet life, but not something that should be common place.

Alex is a crack pilot, having gone to Starfleet Academy and become a CONN officer and it is something she takes great pride in. She's very good at strategy, and loves mysteries, she partially attributes the development of her strategic way of thinking to years of reading and solving them.

She is a person of very diverse interests, which extend into medicine and engineering. Because of this, when unable to decide which she wanted to go into, she took classes in these areas, giving Starfleet Academy something of a liberal arts treatment.

As an engineering student, she has some skills, she can figure out, most of the time, what a problem might be, and can come up with interesting and creative ways of solving them. Something which has helped immensely since her transition into Ops.

She reads a lot and as such has lots of pieces of random knowledge in her mind which have accumulated over the years. She is able to come up with logical-sounding stories at the drop of a hat.

Alex is a former gymnast, she originally was started in the sport as an attempt to teach her some grace. The attempt was successful and more. Alex not only excelled, she competed and won. In 2386 she was the overall gymnastics champion of New York State and then a member of the North American team, which took home the gold at the world championships. Alex retired from gymnastics at the age of 17. She sang with her cousin Nathan's band Trigo during her senior year of high school and during her Academy training when they all moved to San Francisco to take part in the music scene. She is still involved with the band, doing reunion shows when they're in the same area of the galaxy and writing songs for their albums when the mood strikes.

Alex really likes using holodeck programs. She likes mysteries, 20th/21st century research, music (singing), musical theater, archeology. Alex, in addition to using action/adventure/mystery/sports holos on the holodeck, enjoys writing her own programs. Her interests in the 19th, 20th and early 21st centuries and the research this interest has caused her to do, gives Alex an extensive knowledge of games and sports of the time (not to mention other areas of importance like politics and history).

Among Alex's favorite holoprograms are the Dixon Hill and Sherlock Holmes series. A fan of mystery, she says they challenge her and help clear her head. She also sings, plays piano and guitar and writes music for the band Trigo - a band started by her cousin Nathan. Alex was part of the group during high school and academy, leaving after graduation. And of course, Alex flies; she became the commander of the 'Stringfellow Squadron' following the supposed death of Emile Schofield, but has handed it back to him since his reappearance.

She is proficient in sign language, the name sign that was given to her being a combination of the sign for the letter 'A' and that for 'music'.

Alex is am member of the Stringfellow Squadron, a select group of Valkyrie crew members who take part in a World War II battle simulation. Her call sign is 'Shadow.'

Medical Notes: Alex is allergic to avocados (which is unfortunate as she really likes them) and longhair cats.

Family:
Alex comes from a rather large extended family. Her grandparents, Molly and Oliver, had five children: Issac, Zachary, Peter (Alex's father), Tabitha and Andrew. Of the five, one (Issac, the oldest) died young, while the others all have grown and now have families.

Zachary Davis, the second oldest, is unmarried. Formerly the Chief Petty Officer of the USS Excar, he works as a paper-pusher for Starfleet, stationed on Jupiter Station formerly a 15-year member of Starfleet Intellegence... or so his family thinks.

Tabitha Davis Prescott, the fourth oldest, married Jacob Prescott and they have a son named Nathan, a musician and current frontman for the band Trigo (a position formerly shared with Alex). Nathan and Alex have always been very close. (Nathan and his wife Jillian Taylor were on Dinwor V at the Jerwasi Music Festival.)

Andrew 'Drew' Davis (the youngest of the siblings) and his husband James Randall have three children - adopted triplets named Kiera, Tom and Valerie, age 12. The triplets are a quarter Bajoran. Tom - the middle sibling of the triplets - is deaf, as such the family has learned sign language. (Different members of the Davis/Davis Prescott clan have different levels of proficiency.)

Perry Camler - Cousin on Molly Davis' side of the family, Perry is a gymnastics coach. He used to coach Alex, taking her for a brief time to the top of the sport before she made the decision to leave at the age of 17. He is very successful and has taken many gymnasts to the Olympics and other inter-planetary events.

The Davis family homestead (aka Molly and Oliver's home) is in Cobbler's Notch, Virginia.

Band:
The members of Trigo are a very close knit group. Although Alex officially made her exit from the band just before Academy graduation (with a tear-filled rendition of The Goodbye Song [stupid name great song!]) she has remained a part of the group and the band: writing songs and getting back together to perform with them whenever they're in the same part of the universe. Along with her cousin Nathan Prescott, his wife Jillian, Gemma Stadi (their Betazoid bassist), and Chojiro Kamida (their drummer and Alex's ex), the band is pretty well known and has something of a cult following. For her performances, it generally isn't pre-announced. Giving the audience a surprise.